The Quran was obviously written after the Bible as it goes over some of the same occurrences, and has a lot of the same themes.  In comparison, I found the Quran to be not as tedious a read, not as redundant, not as much of the beating of the dead horse.  This is probably due to the fact that it is much shorter than the Bible.

Search for circumcision in the Bible and you will get 99 hits.  No mention in the Quran.  Even though circumcision is a common practice among Muslims, this book isn’t as obsessed about penis talk.

I recently read a news article about a Muslim woman who wanted her hubby back, but she couldn’t get him back until she married and divorced another man.  This is true.  It is written in the Quran.  I don’t quite understand the thinking behind this because a lot of emphasis is placed on marrying a chaste woman.

Punishments for various things in the Quran include eye for an eye, lashing, and getting stoned (not the marijuana kind of stoned – actual rocks you potheads!) but no mention of killing women during halftime of a soccer match.  I can’t imagine there are any female fans of this sport.

The Bible does seem to favor having sons, as they actually get named whereas daughters hardly get a mention.  However, in the Quran there was actual speak of men having shame and being filled with gloom over having a daughter instead of a son.

In the Quran, both men and women are supposed to lower their gaze and remain chaste.  I didn’t see anything about a burka.  It says a woman must wear outside coverings, but isn’t specific except to say that her bosom must be covered.

Okay – let’s talk beheadings.  There is no mention of it in the Quran.  Nothing.  Nil.  Nada. 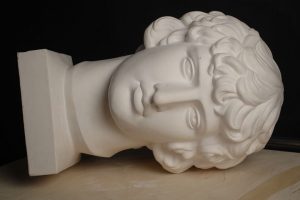 Ironically, talk of beheading shows up 8 times in the Bible, mostly in reference to John the Baptist who was beheaded and his head was brought in on a silver platter as requested by the mother of Herodias.  It is quite strange to think the term “head on a silver platter” is thousands of years old.  In fact, I recently used it in my blog about India kitchen fires without even thinking about John, or the Bible.

I have heard Muslims proclaim they are anti-extremists and that terrorists are giving them a bad name.  After having read the Quran and the Bible, I am very surprised I haven’t heard these same Muslims proclaim that beheading occurs in the Bible and not the Quran.  This should be a serious talking point from mainstream Muslims.

Having said all that, I still gotta admit to the Muslims, your religion scares me.  But then, so does everyone else’s.