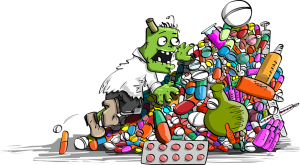 This is a very blind and sick faith.  But that’s okay; vitamins are available.

I’m sure many scientologists are popping handfuls after crossing Leah Remini.  Her series on this “religion”, meaning cult, is quite fascinating and she is a hard pill to swallow.  Don’t mess with Brooklyn.

Pretty much everything Scientologists have been using to keep their members in line is backfiring against them.

Tit for tat written responses for anyone and everyone who has something negative to say.  Double Creepy.

Television interviews where Scientologists repeat the same drilled in responses, sometimes word for word, and the posting of footage from family members denouncing their closest loved ones is triple creepy.

I understand Scientologists aren’t allowed to go online to read about the horrors, including the utter destruction of individuals both spiritually and financially.

Yet this crazy sect immediately responds with an online presence including their version of “news” and numerous hate websites dedicated to naysayers.

If you want to wear blinders, fine.  As far as the children who have been dragged into this cult and harmed, and then blamed for their own harm, well that is another disgusting story.

Keep at ‘em, Leah.  You will hardly ever hear me advocate for the IRS and lawyers, but in this case where there is fraud, bilking, fleecing, parental alienation and child abuse, all within a tax exempt organization, I say use what you can.

One more point.  This group of nuts likes to use celebrities to recruit others.  Those that turn on the church are then targeted as individuals.  We are all watching a few Hollywood headliners take a sharp nosedive right now for being inappropriate, which shows they are not out of reach.  Let’s not forget that Scientology celebrities are individuals, too.  The people can publicly and individually let them know via social media that their continued advocacy for this church of harm is not appreciated.