My Book: Sex in the Name of God

Religion intrigues me because a small group of people who follow a leader, and ascribe to certain practices, is often viewed as a cult. Add in millions of people and suddenly this is a norm. 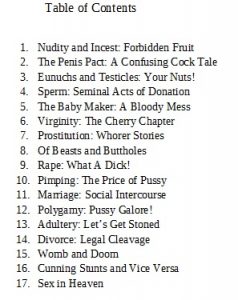 I had never read the bible before. Besides wanting to know what people were really following, I was curious to learn about the basics. How would sex and politics be treated within a religious guideline? Well, I found out.

Putting all murder and mayhem aside, I can now say that if you like sex, and lots of it, then the bible is for you. There was more than enough material to write a book about the juiciest parts; a whooping 197 pages.

The bible is a tedious read; Sex in the Name of God is not. Real bible verses are cited, but scriptural stories were often so crazy, I felt they could only be presented in a comedic light. A few examples from the Nudity and Incest chapter follow.

Genesis 2 7 The LORD God formed man from the dust of the ground, and breathed into his nostrils the breath of life; and man became a living soul.

Not only did man come first, as is usually the case, but this dude was literally a dirtbag.

Another ordeal involving fruit caused the jealous Cain to kill Abel. Only three people are in existence when we are slammed with a major hole in the plot.

Genesis 4 17 Cain knew his wife. She conceived, and gave birth to Enoch. He built a city, and named the city after the name of his son, Enoch.

Either another woman was created, or Cain boinked his mom.

Noah and his three sons are named. These men and their unnamed wives probably entered the boat with approximately six fingers each, which has grown to the typical set of ten today.

Genesis 7 6 Noah was six hundred years old when the flood of waters came on the earth. 7 Noah went into the ship with his sons, his wife, and his sons’ wives, because of the floodwaters.

After the genocidal drowning of humanity there were eight living people, four of whom had wombs. God had a message for these survivors.

Genesis 9 7 “Be fruitful and multiply. Increase abundantly in the earth, and multiply in it.”

Once again, there was the awkward choice of which relative each person should be fruitful with. So far, anything to do with fruit has not panned out well. Grapes are up next.

Since the creation of man, there have been issues involving nudity, gender roles, sex, murder, incest, genocide, and drunkenness, which unfolded in that order. All we really know, and a sound argument against evolution, is that not much has changed. 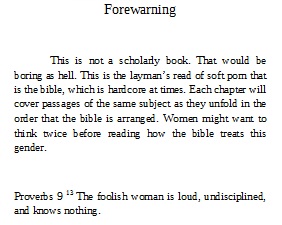 Thrown in just for fun are interesting quotes from famous folks, plus some weird state laws that are still current.

Clothes make the man. Naked people have little or no influence on society.

I would appreciate any help regarding taglines. Humorously informative, shockingly outrageous, thoroughly enjoyable, and funny as hell, might be good starting points.