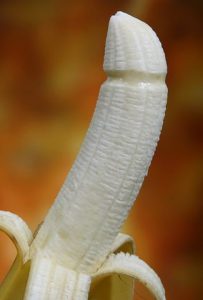 Penis talk begins in Genesis 17 with the verse title actually and factually, really called “Abraham and the Covenant of Circumcision.”  There is serious obsession and debate throughout the good book that even falls back on itself about whether or not one should be circumcised.

The penis is first and foremost of the utmost importance in the history of man, politics, religion, and power.  It is interesting that early discussions should involve how it looks, as in snip-snip or au natural.  I’m sure we all have wondered about how this came to be.  No matter the theories, someone did the convincing, someone did the snipping, and someone got snipped.

In any event, my member chapter probably won’t be chapter one, but since there is so much information and obsession about it, I thought it would be a good starting point.

Besides, who doesn’t love a good cock tale?